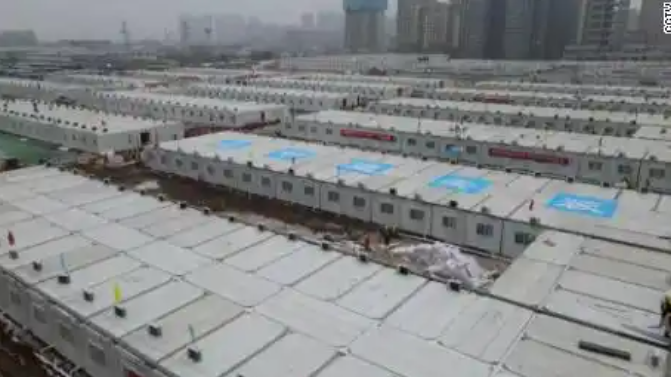 China’s economy expanded 8.1% last year, far exceeding the government’s targets. But weakening growth in the closing months of 2021 suggests that trouble is still on the horizon as the country contends with a depending on real estate crises,  renewed covid outbreak  and Beijing’s strict no tolerance approach to controlling the virus. The 2021 growth figure is roughly in line with the expectations set by many economists. And it outstrips the Chinese government’s target last year for its economy to expand at least 6%. But GDP expanded just 4% in the last quarter of the year compared to a year prior, according to government figures released Monday, the slowest pace in a year and a half. The world’s second-biggest economy may struggle to grow much faster than that through 2022, and China’s central bank on Monday cut a key interest rate for the first time since April 2020 in a bid to boost activity.

“As everyone has seen, domestic growth is under pressure,” said Ning Jizhe, head of the National Bureau of Statistics, at a press conference in Beijing on Monday

Growth in the fourth quarter was bolstered by industrial production, which rose 4.3% in December from a year earlier — accelerating from November’s 3.8% growth.That was thanks in part to the continued strength of exports. Shipments from China beat forecasts and jumped 21% in December, bringing the value of China’s exports for the year to nearly $3.4 trillion.But consumption dramatically weakened amid renewed Covid-related disruptions, such as the massive outbreaks in Zhejiang and Xi’an that caused authorities to close entertainment venues, shut down factories, and put thousands of people in quarantine. Retail sales increased just 1.7% in December from a year earlier, sharply lower than November’s 3.9% uptick.Property investment and new housing projects that have started construction also declined.While the final quarter was “better than expected,” according to Larry Hu, head of China economics for Macquarie Group, the economy faces “multiple headwinds” this year, especially from Omicron and the real estate sector.Hu said in a research note that Monday’s interest rate cut indicated that the People’s Bank of China was now ready to loosen monetary policy further. He suspected that China’s loan prime rate — a benchmark rate at which commercial banks lend to their best customers — could be next.”Downward pressure on growth will persist in 2022,” wrote Louis Kuijs, head of Asia economics at Oxford Economics, in a Monday research report. While he expects real estate activity to eventually start recovering in the second half of the year, Kuijs also suspects that China is unlikely to relax its zero-tolerance approach to Covid until late in the year.”As a result, we project disappointing consumption growth this year, especially” in the first half of 2022, Kuijs added.

China has been contending with a slew of problems recently, including tumult in its property sector.Troubled Chinese real estate developer Evergrande — which has some $300 billion of total liabilities — has been struggling to pay it’s debts and was recently ordered to demolish a few dozen buildings  in the country. Analysts have been long concerned that a collapse by Evergrande could trigger wider risks  for China’s property market, hurting homeowners and the broader financial system.

December marked a significant downturn, though: Investment plunged 13.2% in that month alone, according to an estimate by Chaoping Zhu, chief global strategist for JP Morgan Asset Management.And the amount of floor area covered by newly started housing projects plummeted more than 11% in 2021 from the prior year, government data showed.”We expect further weakness [of the housing sector] over the coming quarters amid tight financing constraints for developers,” said Julian Evans-Pritchard, senior China economist for Capital Economics, in a Monday research note.

Beijing’s unwavering insistence on stamping out any trace of the coronavirus, meanwhile, is facing a huge test as authorities grapple with stubborn outbreaks and lock down large swaths of the population to contain them.Economists have warned that China’s zero-Covid approach to containing the virus could spell serious problems for the economy in 2022. Goldman Sachs, for example, slashed its projection for Chinese economic growth in 2022 to 4.3% from 4.8%, just over half of last year’s figure. They expect consumption to be worst hit as a result of the strict Covid curbs.December’s weak retail sales data is already showing evidence of how disruptive the coronavirus is becoming in China.

The resurgence of regional outbreak and lockdowns, as well as supply bottlenecks in the automobile industry, all weighed on consumption,” said Zhu from JP Morgan Asset Management.Now the threat that Omicron poses to factories and supply chains is compounding the problem.Ship congestion at Chinese ports has worsened recently as more cities implement strict Covid restrictions because of the outbreaks. Some places are also tightening testing policies ahead of the Chinese New Year holiday season starting January 31.The Shekou terminal in Shenzhen, for example, has begun restricting truckers bringing in loaded containers. As of Friday, truckers can only enter the terminal if they have bookings for export-bound containers on vessels arriving within three days, according to a recent statement from the operator.

Those economic challenges likely mean, though, that the Chinese government is going to have to take more drastic steps to keep things running smoothly.Before the central bank cut interest rates on Monday, it had already started loosening its purse strings. Last month, it slashed both the the reserve requirement ratio — which determines how much cash banks must hold in reserve — and the loan prime rate.The Central Economic Work Conference — an event held by top Chinese leaders in December to decide the direction of policy in 2022 — also signaled that authorities are willing to take more aggressive actions this year. At that meeting, the government signaled that it would be proactive about policy, and expects to prioritize infrastructure investment and support commercial housing markets.But Zhu from JP Morgan Asset Management pointed out that these measures don’t seem to have been enough just yet. Bank lending to the private sector, for example, has yet to meaningfully rebound.”This suggests that business confidence has not been restored,” he wrote. “Therefore further policy easing at a longer time horizon is essential.”

Zhu expects the central bank to make further cuts to the loan prime rate in the coming months. China could also allow local governments to issue more special bonds in 2022. Such bonds mainly fund infrastructure projects, which can help spur investment and create more jobs.”With these policies in sight, China’s growth outlook may stabilize, and a 5% GDP growth may be achievable in 2022,” Zhu said.